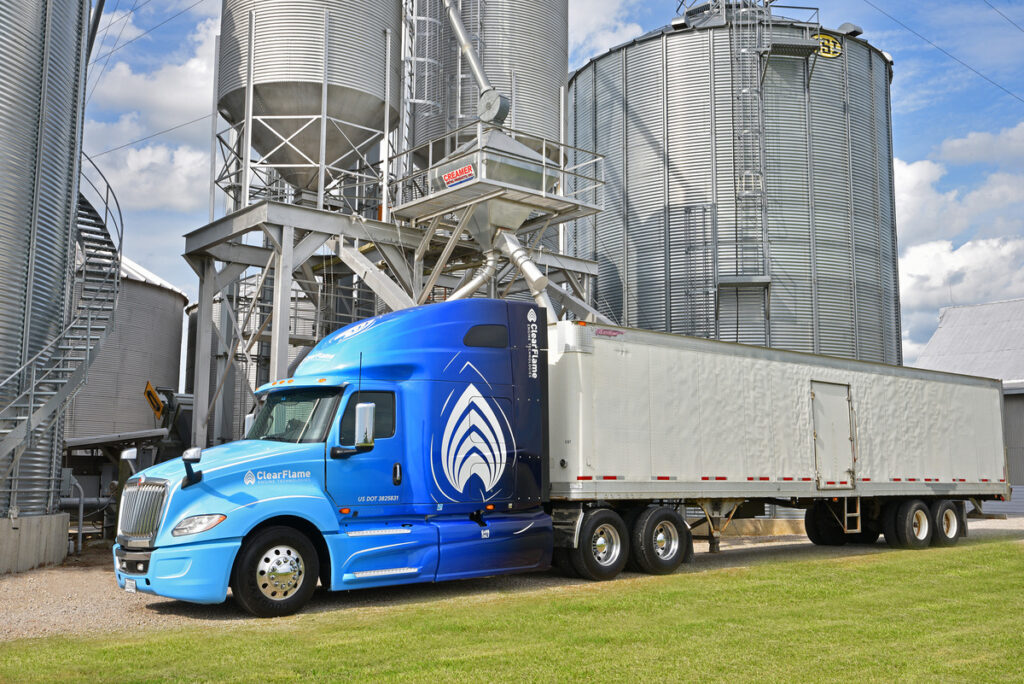 Geneva, IL (September 20, 2022) — ClearFlame Engine Technologies, a company that takes the diesel fuel out of diesel engines, empowering rapid decarbonization for hard-to-electrify heavy-duty industries, announced it has hit a number of key milestones through multiple partnerships with customers, manufacturers, and fuel providers. These achievements highlight the company’s ability to leverage existing infrastructure within the transportation sector, giving it a clear advantage to scale quickly and move to commercialization.

BJ Johnson, ClearFlame co-founder and CEO, noted, “As these cross-industry partnerships indicate, our innovative technology for the decarbonization of heavy-duty engines can be effectively integrated and quickly scaled across the United States in the short term – not years from now. This is critical, particularly in industries like heavy-duty transportation. By leveraging an already existing eco-system and infrastructure, ClearFlame’s solution not only gets us to our climate goals faster, but can do so less expensively – saving fleets money, without any green premium.”

Johnson continued, “The speed and agility with which the Indiana ethanol fuel coalition was able to come together to provide E98 fuel to our truck with Beck’s goes even further to underscore how easy it will be for ClearFlame’s technology to rapidly scale for fleets across the country. Ethanol is already distributed through fuel terminals nationwide. In addition to being widely available, it’s proven to be a much greener fuel, with substantially lower carbon emissions than diesel, and significant cost savings.”

Julie Blumreiter, ClearFlame co-founder and Chief Technology Officer, added, “These critical milestones for ClearFlame are further proof of the flexibility and agility of our technology, which continues to hit every technological milestone at incredible speed. Our partnerships with Reviva and Vander Haag’s, Inc. demonstrate that we can move extremely quickly to seamlessly capitalize upon the existing ecosystem of engine remanufacturers and more than 250,000 mechanics who already service diesel engines today in the U.S. with no need for additional infrastructure investment, special tools, or complicated training. And through our work with fleet partners like Beck’s, we’ll continue with extensive durability testing and validation of our technology, keeping our lower-cost solution on track for successful commercialization in late 2023.”

As part of ClearFlame’s agreements for engine modification, Minneapolis-based Reviva has been named ClearFlame’s initial engine remanufacturing partner, responsible for integrating ClearFlame’s kit into existing Cummins X15 engines; engines will carry a two-year warranty. Reviva partnered with ClearFlame to bring cleaner fuel options to customers. For over 70 years, Reviva has been providing quality remanufactured engines and engine components. Reviva is the largest privately held diesel engine remanufacturer in North America and its engines are available at most aftermarket truck component suppliers and large truck dealers in the USA and Canada. Vander Haag's, Inc., with nine locations throughout the Midwest, will serve as the vehicle integrator, reinstalling the ClearFlame engines into Class-8 trucks. In addition to being the vehicle integrator, Vander Haag’s, Inc. will also leverage their parts distribution network to provide components for the initial integration as well as ongoing parts support. Both companies, seasoned veterans in the heavy-duty engine modification industry, are building on their long histories of providing excellent services and support to customers with new services to demonstrate a renewed focus on present-day demand and client needs.

Beck’s, the largest family-owned retail seed company in the United States and third-largest seed brand, represents ClearFlame’s first official pilot. During the pilot, the truck is accumulating miles and driving long distances in a range of operating conditions, as well as short haul routes between the company’s Indiana locations, with a variety of different load types. Several other pilots with other companies are also planned through the end of the year.

ClearFlame expects to achieve commercialization of its engine modification technology by the end of 2023. The company is currently working with the EPA to achieve all environmental approvals; trucks are currently running under EPA exemption.

While ClearFlame’s technology is fuel agnostic and can run on any clean fuel, its current engines run on ethanol, which is widely available across the United States as a blend component, but is not currently for sale. In order to provide E98 to the ClearFlame-modified truck with Beck’s, a group of Indiana fuel providers came together, creating the first coalition enabling the use of ethanol as a truck fuel. These included Central Indiana Ethanol (as manufacturer), CountryMark (as distributor), and Co-Alliance Cooperative Inc. (as fuel retailer).

At ClearFlame Engine Technologies, we’re breaking the bond between the diesel engine and diesel fuel, accelerating the path to true emissions reduction for the heavy-duty and off-highway markets. ClearFlame unlocks diesel engine platforms to use a wider range of clean, lower-cost fuels instead of expensive, dirty fossil fuels—lowering costs without compromising the practicality or performance of traditional diesel engines. Our technology meets global sustainability goals faster than alternatives by using the decarbonized liquid fuels available throughout the world. For more information, visit www.clearflame.com, and follow us on LinkedIn and Twitter (@ClearFlameEng).